Here Come the Videofreex has arrived!

An update on a film close to my heart…

Videofreex (from left) Carol, Parry, and Davidson, along with Videofreex exhibit curator Andrew Ingall, chat with Skip at a milestone event. Ann is there, too, and Bart is behind the camera.

Before I explain exactly what I mean, I want to go back four years. Attending a screening of Videofreex work at the Light Industry in Brooklyn, I met a guy named Jon Nealon who said he was interested in making a documentary about the group. I was impressed and flattered on behalf of my late dad and the rest of the crew, but wasn’t sure exactly how this film and funding would materialize.

After an energetic Kickstarter campaign, hours of interviews, scores of tapes restored, and months of editing, it’s safe to say he meant it.

In the Passover Seder, we say “let all who are hungry, come and eat.” So I was excited when writer friend Whitney Pipkin approached me with a craving to try her first Pesach experience. She and her husband forked in the new information and traditional foods earlier this week, and Whitney wrote a colorful post about the evening. Very pleased to share it with you! 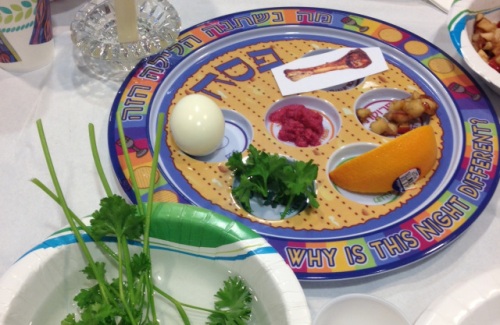 As a journalism student at the University of Oklahoma, I was once assigned as homework what would become one of my favorite pastimes later in life: go participate in a cultural or religious ceremony that is outside your realm of experience.

For the assignment, I attended my suite mate’s African American Southern Baptist church. It felt like an easy way out in some regards. But, having grown up in a comparatively stoic Presbyterian church in Kansas (although we did have a “contemporary” service), it proved to be a rich cultural experience. I was enthralled as the pastor sang half the sermon while nearly dancing down the center aisle, accompanied by a chorus of ‘Amen’s from those in attendance. It made my church look like nap time by comparison.

I began to cherish these types of cultural experiences and seek them out on my own. I love the feeling and learning that comes with entering into a…

Returning to my food writing roots, I offer you this recipe.

You may find yourself at home on a snowy day, with work canceled and your tummy hankering for a warming breakfast of huevos rancheros. I know it’s a plausible situation, because it happened to me today. Here’s the salsa I came up with, using what I had around the house (because when this happens to you, living in D.C. may have thinned your skin just a tad, and you may shudder at the thought of venturing to the store in four inches of snow).

Of gardens, deer and research

Photo by Flickr user r.a. paterson. Neither my fence nor garden are nearly as nice.

Deer fences have been on my mind, which believe it or not has to do with writing.

It all started in my community garden around the Fourth of July. That’s when I noticed a garden neighbor, a quiet gentleman in his late 60s who tends to weed in a button-down shirt, walking down the garden path flourishing red, white and blue leis. By that time, my fellow gardeners and I had been grumbling about the nibbles for a while. Hungry, overpopulated deer had eaten whole crops of string beans and beets, and gobbled my Swiss chard plants down to nubs. Even my tomato plants, which are supposed to be deer-proof, fell victim.

“The deer obviously didn’t read the gardening books,” I remember another plot neighbor quipping. “Tomato plants are supposed to be poisonous!” END_OF_DOCUMENT_TOKEN_TO_BE_REPLACED

Growing your own grain 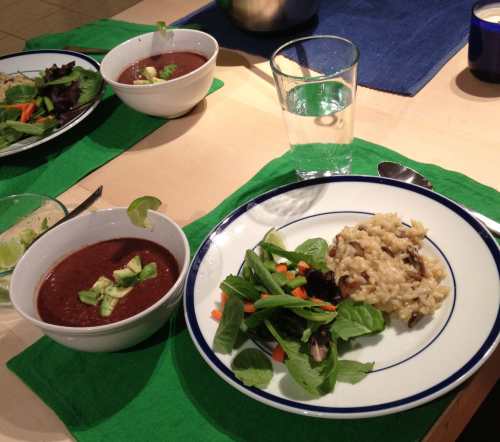 At the halfway point of my month of eating in, I’ve been thinking about the second-century Jewish scholar Achai ben Josiah. Achai compared someone who buys grain rather than growing their own to an infant whose mother has died and can find no match for her milk.

I don’t grow my own grains, but I can see the allure of spending time preparing them. In fact, this weekend, my boyfriend and I joked that my theme was Constantly-Stirred Grain Dishes. I started off with a golden, slightly firm polenta. The next night, it was a creamy risotto with saffron, lavender, and mushrooms.

I did purchase bulk grains I’ve eaten this month, but I’m still here — and remarkably satisfied. I hope Achai believed in baby steps.

If you need an idea or inspiration for eating in, here’s a recipes for the risotto. (After the jump) END_OF_DOCUMENT_TOKEN_TO_BE_REPLACED

Eating in goes off site

The Jew and the Carrot just published an account of my progress through my food challenge. Check out “Eating in for 31 days.”

Tagged as 2013, cooking, eating in, home cooking, Jew and the Carrot, resolutions

Today marks my fourth day into a 31-day challenge to eat in. I have two pieces of good news: First, I survived two days of solid travel without buying any food and second, The Jew and the Carrot will publish my thoughts on the month. More soon!

About the photo: This sign I shot at a D.C. Metro station sums up my 31-day challenge. Sometimes home will have to come with me, though.

When the clock strikes 2013, I will embark on a month of eating in. No sit-down restaurants, no takeout, no Starbucks. I figured it’s time. I’ve worked to demystify home cooking. I’ve relied on my own for a solid week. And now I’m bound for an adjunct faculty budget, where every scrap of savings counts.

Others have eaten in for more than two years straight–in New York City. I figure I can manage it for 31 days in D.C.

Stay tuned for more (you can even subscribe over there on the right), and happy New Year!

Daniel Bullock, the mysterious casualty at the end of a sentence

A memorial plaque at the New York City Vietnam Veterans Memorial Plaza is dedicated to Daniel Bullock, the youngest American serviceman to be killed in action in the Vietnam War. Photo by Rhea.

The form letter from Marine Captain Kingrey lumbers on for a good two dozen words before it gets to the condolence.

The recent death of your son, Private First Class Dan Bullock, U.S. Marine Corps, on June 7, 1969 at Hoa Combat Base, Quang Nam Province, Republic of Vietnam, is a source of great sorrow to me and all the members of Company F. Please accept our deepest sympathy in your bereavement.

As far as the Marine Corps knew, Bullock was old enough to serve in the military. Yet days after his death, The New York Times ran an article stating his actual age and declaring this North Carolina native “the youngest American serviceman killed in the Vietnam War.” END_OF_DOCUMENT_TOKEN_TO_BE_REPLACED

Lydia Callis and The Politics of Language

A hearing second grader I know signs “America” with two fists stacked and stirring. This is how he remembers learning it in his public school. Though most American Sign Language users sign “America” with interlaced fingers that look like the corner of a log cabin instead of like they’re gripping a giant spoon, the message is clear: We think of the U.S. as a melting pot.

Only who we call to melt with us isn’t consistent. This became clear with the star-spangled rise to fame of Lydia Callis, an American Sign Language interpreter for New York Mayor Michael Bloomberg during press conferences last week. As Teresa Blankmeyer Burke writes in DeafEcho.com:

Lydia Callis…is getting a lot of attention these days for her interpreting during Hurricane Sandy. She’s been spoofed on Chelsea Handler’s show, she has Tumblrs dedicated to her, and she’s even been named  Hot Slut of the Day by Dlisted.

Each of these media hits was trailed by effusive comments. Okay, some pointed out that facial expression is part of ASL grammar and that she was just signing like anyone else would. But most commenters couldn’t glow enough. Parents said their toddlers were inspired to learn sign language; nonsigners claimed they understood Bloomberg’s message better thanks to her work.

Finally, Callis won the ultimate hat tip: A spoof in the opening sketch of Saturday Night Live. In this one, Fred Armisen as Bloomberg gives a spiel with an expressive “Callis” (Cecily Strong) at his side.

But something is off. Did you watch all the way to the 3:30 mark, where Armisen-as-Bloomberg delivers “a message to our Spanish speakers,” sixty seconds of the most disastrous, hilarious white guy accent you’ll hear this side of an overzealous Taco Bell order? If not, go back and watch all the way to there. Then consider how your average American might react to each non-English section. END_OF_DOCUMENT_TOKEN_TO_BE_REPLACED