“Past the Law: Moving from Legal to Just in Disability Accommodations”

Much of the discussion about accommodations to give disabled people access focuses on legal requirements set by laws such as the Americans with Disabilities Act. The speakers on this panel will argue that passing laws such as the ADA is not enough; equity and social justice require rhetorics and action that move past the law. Advocacy that fails to move beyond old rhetorics of disability as deficit, of accommodations as an add-on obligation, will fail to achieve social justice; this panel will provide examples of a new rhetoric that focuses on advocacy over obligation and question the ableist discourses of accommodations because these relatively recent bureaucratic disability service discourses, not unlike their predecessors—medical and rehab discourses—are  becoming ipso facto knowledge-bearers of disabled bodies in the academy.

Here’s an example of the Week 3 assignment for ENG 360. This one is an analysis of tweets from two DC City Council reps during the 2016 election year.

To start off your own assignment, add an intro to the analysis you’re about to provide.

Thrilled to join @WhittierECSTEM this AM for the #FirstWeekofSchool! Proudly supporting #Ward4 students & educators! pic.twitter.com/SBRAKAHKzs

[^ I embedded this tweet. If you don’t know how to embed, you can screenshot and add a link to the original tweet ^]

In this tweet, Ward 4 city council rep Brandon Todd shares several images of himself with constituents in the first week of school. There are four images total, including one with a child and parent or guardian; two with just children; and one with what appears to be a teacher or school administrator.

I think Todd is keeping in mind the diversity of the ward he represents and, specifically, the audience that would be following him on Twitter. He selected a STEM-focused school, and made his layout balanced both visually and conceptually. [FURTHER ANALYSIS, USING THIS WEEK’S READING, WOULD GO HERE]

Happy #NationalDogDay from Louie (a @CapitolCanines alumnus) who joined us at the 50th Palisades 4th of July parade! pic.twitter.com/EhOEXqrX5I

Here, rep Mary Cheh tweets in honor of National Dog Day. She shows one photo of a dog-owning constituent wearing a Mary Cheh T-shirt and other shot of just a pooch.

I think Che’s intended audience was the thousands of dog lovers and dog owners in DC. [INSERT MORE ANALYSIS HERE] 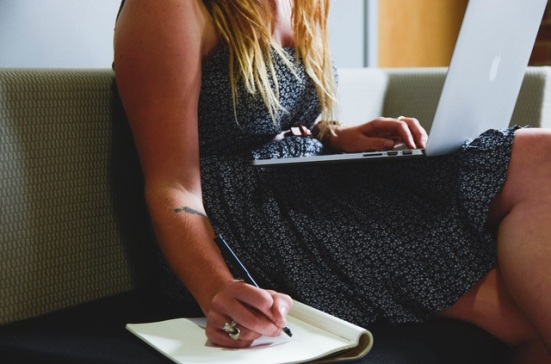 Last year, I had a lesson in writing as a woman. I want to share it today, in a pre-Mother’s Day post.

The lesson started at a reading by Mary Gordon, an author I’d known in my childhood. To me, Mary was my friend’s mom. It wasn’t until years later that I learned how most people identify her: As a famous writer of novel and memoir, a professor of writing at a prestigious New York school.

When the Q and A commenced, I popped up to the mic and asked Ms. Gordon, essentially, how she did it all. How was she the parent who fed us dinner and a creative force to boot? How could she embody both mother and writer? END_OF_DOCUMENT_TOKEN_TO_BE_REPLACED 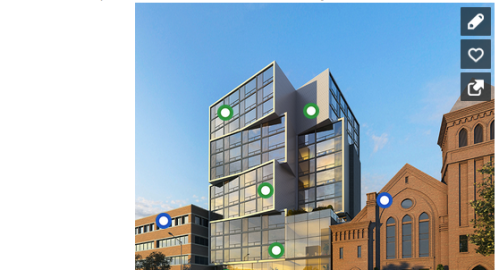 Affordable apartment units for veterans are an important feature of the John and Jill Ker Conway Residence, now under construction on North Capital Street in DC. Architectural rendering courtesy of DLR Group | Sorg.

I was honored to contribute a multimedia element to a story on affordable housing on Elevation DC. The whole special report package is worth a careful read. My graphic is under “Affordable housing: Then and now.” It’s a two-part piece showing old and newer (wrong and right?) ways to approach the concept.

Check it out: Special Report: Why D.C. needs more affordable housing–and how we can get there

The (former) most interesting man in the world gives sage advice. Image made by Rhea with memegenerator.net.

To find out more, attend my workshop:

How to Not Totally Embarrass Yourself on Social Media

^^ This has been another post scrutable only to students in ENG 370: Multimedia Composition. Regular RSS subscribers, please ignore and go back to your regularly-scheduled Web-based procrastination ^^

Screenings and a panel in New York

…and in other news…

It’s been an active month for the Videofreex. Building on a successful debut in North Carolina, “Here Come the Videofreex” made the rounds in New York last week. In between showings in Brooklyn and Rosendale, the Brooklyn Museum hosted the screening and discussion Videofreex and Feminism: “Bumps on a Level Playing Field”.

I attended the Rosendale Theatre screening, seeing the final cut of the film for the first time. I couldn’t have been more proud of what this energetic band accomplished, or of filmmakers Jon Nealon and Jenny Raskin, who spent a decade on the movie. Naturally, we received the royal treatment.

Seats in the first rows of the Rosendale Theatre await the Videofreex and guests. The signs read “RESERVED FOR FREEX.”

This happened. It really, finally did. And it was magnificent.

A panoramic view of the first rooms of the exhibit. Photo by Rhea.

On February 7, the public had its first glimpse of Videofreex: The Art of Guerrilla Television at the Samuel Dorsky Museum of Art. The New Paltz museum dedicated a few thousand square feet to this massive retrospective, curated by Andrew Ingall. There were video screens, maps of New York City and State plotting Videofreex haunts and activities, ancient equipment stenciled with their name, and hundreds of people there to witness it all.

That day, from a Prosecco toast to the last drop of reminiscence over dinner, was one for the Videofreex record books. Though I wasn’t around to experience the Videofreex heyday, I felt very much a part of their renaissance. I found myself saying things like “You’re Horrible Howard? It’s so good to meet you!” and “You directed The Kitchen??” The exhibit runs through July…

One week until Videofreex: The Art of Guerrilla Television

New York and New Paltz area residents, come on by! 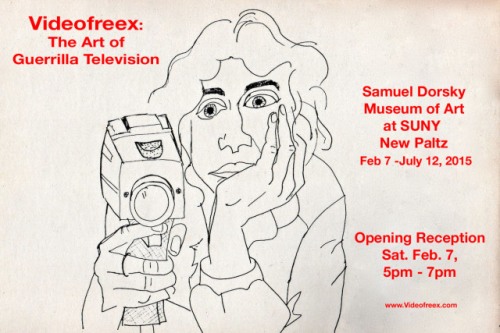 Just one week from today, on Saturday, February 7, the Videofreex exhibit opens at The Dorsky. That day, members of the Videofreex will come from New York, California, and D.C. (that’s me!) for the opening reception. Skip is driving up in what he’s dubbed the Videofreex Mini Media Bus. Join us at the Samuel Dorsky Museum of Art on the SUNY New Paltz campus in New Paltz, NY.

Check out the upcoming events, including showing of the Videofreex documentary in progress:

Public Programs and Events for Spring 2015

And check out more of Bart’s posters below/after the jump (P.S. I think “BYOB” refers to your own bunny suit. What about you?)