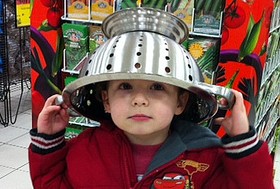 If only a mind-reading device could read our feelings, too. Photo by Flickr user miguelphotobooth.

In 2013, the word “selfie” catapulted to fame. It happened organically at first, its usage jumping 17,000 percent in a single year, according to Oxford Dictionaries’ calculations. Then it happened officially, when that great keeper of human vocabulary declared “selfie” the Word of the Year.

Which word will light up the lexicon in 2014? That’s a tough call with so many months and pop culture phenomena still to come. I recently learned a couple of words I would like to share, though. Here goes:

Telempathy (n.) According to science writer Michael Chorost, telempathy is “the apprehension of another person’s feelings, rather than thoughts.”

As I mentioned before, I’ve been reading Chorost’s book World Wide Mind, and came across it there. This is a next step in interconnectedness begun by the Internet. We know the content of others’ thoughts through blogs and emails with astonishing speed. But what about the emotions behind them? That element lags behind, or never even makes it to the other side. Emoticons can only go so far.

A dose of telempathy would really come in handy for one of my email groups, not to mention Canadians.* END_OF_DOCUMENT_TOKEN_TO_BE_REPLACED

Filed under Language, On media