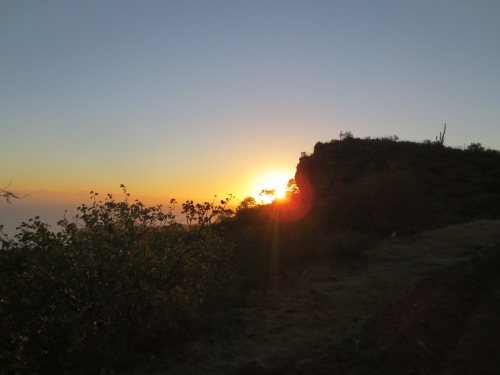 In one of the first pre-dawns of 2014, I stood next to a handful of travelers and watched the sky. As I focused on the layers of stars, I saw it. Meteors cascaded one by one through the Baja night. The only sounds for minutes at a time were our gasps.

It was the end of a two-week bus tour along that western peninsula of Mexico, and that entire time I’d been without a computer. I wanted to bring my laptop, but logistical concerns mounted: Limited access to electrical outlets on the bus where we spent much of our time, the risk of damage or theft, few opportunities to connect to email or look up words and maps. So I left it.

It sounds cheesy, but I think the release from constant connectivity helped me to feel the chilly air touch my skin that night, to notice and appreciate the shooting stars. It helped me to be fully at the beach when I was at the beach, to immerse myself in a scramble among rocks glistening with quartz and marvel at cacti reaching into a cloudless sky.

But when I parted with my MacBook in D.C., I felt like I was walking off a cliff.

The 2014 International Consumer Electronics Show (CES) lighting up the media from Las Vegas proves I’m not the only one tied to technology. This year, the annual event features products like a bike bell that plays whatever sound you upload to it and smart earbuds that can monitor your heart rate.

Even as a member of the super connected masses, something changed for me when I returned to the land of ubiquitous 3G access and my own hardware. I looked over some of the stuff at CES, and found that attaching more gadgets to my bike or ears didn’t excite me. When I got back to the U.S., I dreaded that hunch over a keyboard and used my phone only for making calls. The feeling didn’t last, of course. In little more time than it takes a meteor to flash across the sky, I’ve already caught myself pulling out the Android and tapping on the Gmail icon several times a day.

Is constant technological connectivity a must, or inevitable? A surprising article about Google Glass suggests it isn’t.  During a year of using Glass, even the author’s Wired colleagues and his own wife found the intuitive on-face technology off-putting. And one of the keynote speakers at CES is Marissa Mayer, the Yahoo! CEO who famously requires her employees to report to the office as people rather than chat icons or voices on a conference call.

Right now, I’m reading science writer Michael Chorost’s take on how technology has adhered itself to our bodies and lives, and will continue to. In his book World wide mind: The coming integration of humanity, machines, and the Internet, Chorost points out that cochlear implants have already made humans into cyborgs, how people feel physically and emotionally awkward without their mobile devices, and that teens send an average of 76 texts per day. (That last one is a 2009 statistic. Just imagine where the numbers have gone since then). Chorost’s theory, which I’m still trying to grasp as I read, is that integrated technology could actually bring us closer together; could help us experience, understand, and navigate the world as one.

By now, the 34 others on my tour have dispersed to dozens of cities on three continents. We will probably never take in a Mexican landscape together again. I won’t cry over that, though. Just like my glimpse of the disconnected life, I’ll always have those 14 days of shared experience.  And besides, we have photos on our group Facebook page.