Mandela and the media 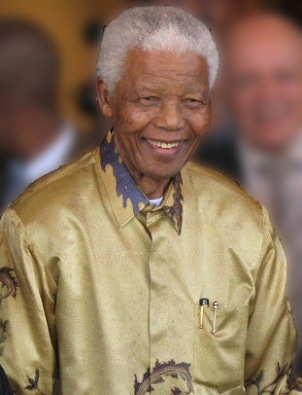 Nelson Mandela in Johannesburg in 2008. Photo from South Africa The Good News / http://www.sagoodnews.co.za, via Wikimedia Commons

There it is, on page A8 in the World section–the part I usually flip past between reading the headlines on the front page and the latest dish in Style.

That’s it: The miracle. That’s what I want to talk about, and will get to if you’ll indulge me for a minute.

As you know, South African president and eternal human rights icon Nelson Mandela died at age 95 on December 5. You probably also know that the event sent personal and national consciousness spinning. I had grown up hearing about Mandela, following the boycott my mother maintained against South African companies, feeling elation at his release from prison and the official end of apartheid in 1990, and watching with wonder as this beaten man grasped the presidency of his country in 1994.

The media coverage of Mandela’s passing spotlighted, in no particular order of importance: His glowing courage, the patience he taught the world through 27 years in prison, the faith the world showed his country with two decades of boycotts, the contemporary memorials around the world, a bizarre case of botched sign language interpretation in Johannesburg, and even the heroic figure’s complexity and failings. (Mandela was, after all, a leader who didn’t always follow the Gandhian script of nonviolence or the rebel code of political overhaul).

Yet for me, the most important message from Mandela’s death was to notice the miracles on A8.

I’m talking about a broad definition of miracles here, to encompass the surprising, shocking, and even sinister. In the week after Mandela slipped away, the Ruling Workers’ Party of North Korea ousted a member of its most powerful political family (then quickly and scathingly dispatched him for his crimes), protesters in Thailand have ramped up demands to fast forward government reform, and protesters in Ukraine intensified their insistence that President Yanukovych move toward accession to the European Union.

The story from Ukraine surged to the front page yesterday, for the first time I’ve seen in weeks of outdoor opposition in the brutal Eastern European winter. Anti-gay rights legislation has also peaked in the last week, strangely enough, with defeats from Southeast Asia to Australia.

At some point, apartheid laws in South Africa inhabited that zone below the public radar. It could happen again. As cynical as it may sound, I believe that natural disasters and policy earthquakes grasp the headlines only if they strike the right balance of intrigue, impact, accessibility, and sensationalism. What that the ideal balance is, I can’t really say. But I can work harder to catch that next miracle as it hums its low anthem.

Filed under International, On media