A peek at the journalism of yore 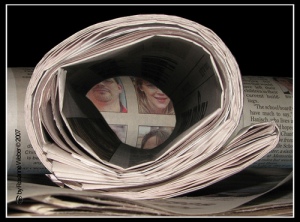 Scott Simon recently lamented our current discourse as weakened by watering-down factors. I don’t think all is lost, but I know one thing: The way journos write has changed. My thoughts got churning as I waded into a few ’70s-era articles in preparation for an upcoming screening from my dad’s video collective past.

“’Videofreex Is a Video Production Studio, a Mobile Production Unit, a Video Environment, a Group of People,’ a sign said.” This opens a December 12, 1970 “Talk of the Town” piece in The New Yorker simply titled “Videofreex.”

The Videofreex, an informal organization of nine men and women who own a loft and three portable Sony videotape recorders, spend their time using their videotape recorders in ways as strange and effective as they can contrive; then, once a week, on Friday, they show what they have accomplished to people who know where their loft is.” It goes on to describe the view of “our friend,” the quirky, anonymous force who apparently tipped off the writer to the group’s existence: “Among the Videofreex, I am struck with a poignant nostalgia that has to do with my Paris-in-the-twenties fantasy life.”

See the repetition of words there? No attempt to restate with clever synonyms. That’s just one thing I noticed. The piece goes on to talk about the Freex’ mad variety of videos, including two on tap for the event–from footage of people brooding “It’s gonna rain, it’s gonna rain” under an umbrella to an interview with Black Panther Fred Hampton.

Next, The New York Times.

John J. O’Connor, in a July 25, 1976 “TV View” piece, wrote that a video broadcast by Image Union, of which the Freex were a part, “was completely unstructured, sometimes meandering into pointless and irritating corners, but often tripping into moments of brilliance.” O’Connor was writing about coverage of the ’76 democratic and republican conventions. “The Tedium of Gavel-to-Gavel Coverage,” the title of his column, leaves little question of his view. So the Freex-spiced Video Union got a little appreciation. My favorite part: “Uneven, annoying, intriguing, often terrific–‘Five-Day Bicycle Race’ provided a significant contribution to convention coverage, and at a cost amounting to an infinitesimal fraction of network budgets.”

An opinion just out there. Rather than the stating of facts and then quick insertion of opinion, with a nose-up attempt to take the higher road than one’s opponents, that I see more often. Words like “Annoying” rarely make  an appearance anywhere but the comment section of an article.

Sure, I know that the days-long hanging out practiced by Gay Talese and Joan Didion are, for the most part, no longer practical or practiced. Yet I hold this idea that final product remains the same. One need not fly to Heathrow and nudge into Kate Middleton’s inner circle to get a good idea of what goes on in her life right now. And who would want to? Experts stand at the ready to share a nuanced view.

Just from this small sample, and thinking back to older New Journalism, think that dry, frank, and biting have given way to clever, casual, and snarky.  Maybe I need a larger sample to make a definitive statement like this. But I really think the tide is changing, for better or worse. Sorry, Scott. I’m just sayin’.

The screening, called The Videofreex Pirate TV Show: TV from the Underground, will be held January 19 at the DC Arts Center, 2438 18th Street NW, Washington, DC.