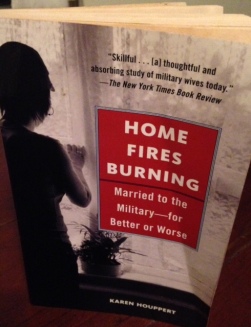 It seems fitting to finish Home Fires Burning: Married to the Military–for Better or Worse on Memorial Day.  And that’s what I did. Considering my last What I’m Consuming post* was a while ago, I’m also due for another one. So here it goes.   What it is and why it’s here This is a book of nonfiction by a writer I respect, who spends years researching her books.** She is also the daughter of a U.S. Air Force pilot. Home Fires Burning weaves together portraits of, as Houppert puts it, “women who straddle the military world–one foot on post, one foot in the civilian sector.” Most of the interviews took place on an army base in New York. But each personal story reifies a larger narrative–about war widows, domestic violence, the economics of military jobs, political dissent. Though Houppert is a seasoned journalist, the picture she paints is far from neutral. The book takes a critical angle on military practices, especially when it comes to spouses and children of the enlisted. The stories highlight hypocrisy on the bases and in the military in general. END_OF_DOCUMENT_TOKEN_TO_BE_REPLACED