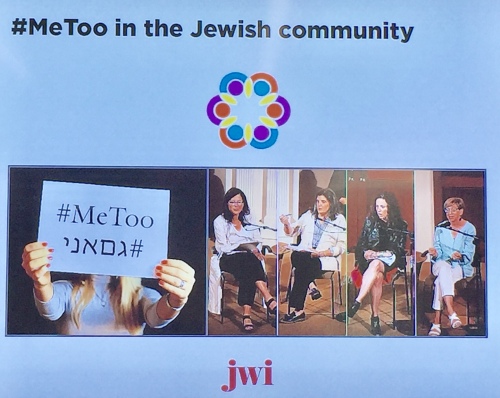 A slide from Jewish Women International introduces the program at the July workshop.

Last week, I attended a workshop called A Jewish Communal Response to #MeToo. I came in my role as vice chair of the board for Hillel at Gallaudet. Kudos go to the Jewish Federation of Greater Washington for hosting and inviting organization leaders to the table. Still, an invitation is just the beginning. I was curious to see what the conversation and approach would look like. The workshop, held over breakfast at the Federation’s HQ in Rockville, Md., followed a simple and proactive agenda.

The main program kicked off with the particulars and immediacy of “this moment,” courtesy of Lori Weinstein from Jewish Women International. Weinstein is the CEO of JWI and, she noted, bears no relation to the notorious Hollywood figure who triggered today’s #MeToo movement. She started by outlining the types of harassment, then shared the picture painted by data from the Chronicle of Philanthropy and the Association of Fundraising Professionals. The statistics point to outstanding challenges for nonprofits, especially in fundraising. Those who give to organizations can take actions and make assumptions that constitute sexual harassment.

Organization employees do not only face harassment and unfair treatment through relationships with donors, of course. Institutions can see issues between co-workers, between board members and staff, and the between staff and members of the community. In all, the Chronicle reports, 25 percent of women in fundraising say they have experienced sexual harassment. The image comes into harsher focus any time Weinstein takes her own survey: When she asks a group of people to indicate if they’ve experienced sexual harassment, often 90 percent of the women in the room raise their hands.

Addressing sexual harassment isn’t just about complying with the law, came the message from JWI. It is about the culture and image of an organization. Organizations can and should go beyond what is legally required

The next step was a list of possible actions that organizations can take to address the problem (more on that and other takeaways later).

The teacher in me kvelled at the subsequent activity: Small group discussion. We put down our bagels and cream cheese to sink our teeth into scenarios based on real events. The people at my table had to tackle a situation with a two-pronged issue. In our scenario, the first problem was that several staff in fundraising positions reported inappropriate comments and actions from male donors. A second problem came when the staff told a manager (who was a woman) and the manager wrote off the behavior as the culture of older Jewish men. Essentially, “boys (of a certain generation) will be boys.”

Later, Weinstein shared that my group’s scenario cleaved very closely to real events (though not from a local organization). She also knew the outcome of that situation. When the manager dismissed the reports, one of the complainants took matters into her own hands. She held a brown bag lunch meeting to discuss harassment in the nonprofit, resulting in staggering attendance. From there, a grassroots effort built and soon spread upward to the management. The higher-ups took action to confront bad behavior and, if I recall correctly, reexamine their policies.

The morning continued with a presentation by Courtney Fisher of the Jewish Coalition Against Domestic Abuse. As the interim executive director of JCADA, Fisher could share a wide breadth and depth of resources. She touched on workshops and offered that the organization could even conduct a full review of an organization’s sexual harassment policies.

My take-aways from the workshop to this point included:

To close out the program, Weinstein invited participants to ask final questions or comment. Then Preuss gave closing remarks. This post is one way I am sharing #MeToo ideas with the Hillel at Gallaudet board and others. I hope we can take action. Another workshop for Jewish congregations will take place this coming week.